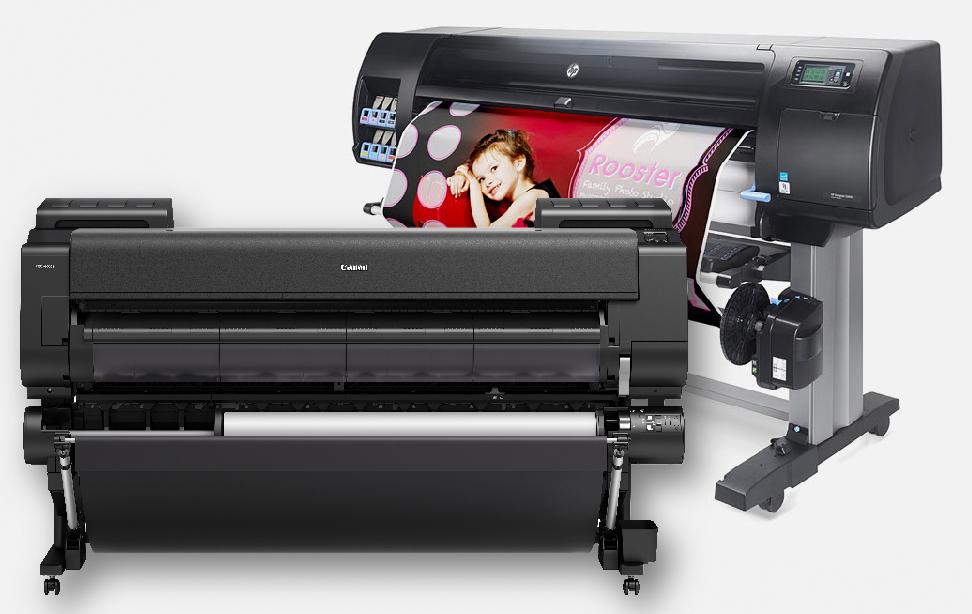 When considering these two printers you are entering in to the realms of models which are more specifically aimed at the graphic arts market, principally owing to the extremely accurate colour reproduction, together with superb colour stability. As we sell both printers, it made sense for us to carry out some trials to see if we could identify the high points, and some low ones, for both printers. There are no doubts that either model is an extremely capable high-quality printer, so the comparison is perhaps the same were you to put a BMW 3-Series car alongside a Mercedes C-Class. Sometimes it can just come down to personal taste and familiarity with a brand name.

The first area of our test is size, the Canon imagePROGRAF PRO-6000S (Canon) may appeal to those who have very limited space. It has a footprint of 1999mm compared to the 2430mm of the HP DesignJet Z6800 (HP). Having carried out a number of comparison tests, our overall opinion is that while the Z6800 produced remarkably clear images, the Canon had a slight overall edge where vibrancy of business graphics and higher optical density was concerned.

Is Canon Pro 6000S the fastest printer in town?

It can be difficult to ascertain just how fast printers are because of diiferant print modes, but it is nonethless an important area of our test. Once again we were impressed by both machines, with the Canon just edging it on an overall basis. However it was outperformed in a number of areas by the HP model. As an example, the HP was 23% faster than the Canon in terms of speed of the first print-out when in Standard/Normal mode. However, the Canon was 19.6% faster for print-out time from ready state using ‘Fast’ mode when we printed off a single medium-size poster on matte coated paper.

Interestingly, for multiple copies, the Canon was 5.5% faster than the HP model when printing off five single-page A1-size high-resolution portrait tests documents  when using ‘Fast’ mode, but 17.4% slower than it when using ‘Normal’ mode. Ultimately, the Canon perhaps edged it over the HP printer owing to the results of all poster tests on coated media where the HP was outperformed, as was the case with the majority of photo printing tests on glossy media.

Ink - has the HP Z6800 got the better austerity credentials?

Where ink consumption was concerned, again the best performer depended on the document type, but where cartridge change was concerned, the Canon had the added advantage with its sub-tank system. This allowed for changing cartridges while in operation; for the HP the printing process has to be halted. It’s another case of swings and roundabouts where cartridge capacity is concerned, with the Canon offering a 330ml matte black and CMY cartridges against the 225ml for all HP colour cartridges. In reverse, the Canon only has a 190ml cartridge for the remining colours. Each printer has eight inks, including two blacks and one grey.

Interestingly, while the HP has four printer heads, combined these deliver fewer nozzles per colour compared to the Canon, with 16,896 as opposed to 18,432, or roughly 10% less. Additionally, and this may be more relevant for some of you, the Canon offers borderless printing which the HP does not. To weigh up the balance, the HP comes with a built-in spectrophotometer to enable colour calibrations on all media to guarantee colour consistency, a feature the Canon does not offer.

On the IT side of things, both machines offer excellent processing power and memory storage – both have 320-GB hard drives, though the Canon offers 3GB of RAM as opposed to 1GB for the HP. The facility to print direct from USB flash drives is offered by both the Canon and HP which we found to be a very useful feature. The Canon offers a plug-in for Microsoft Office which enables posters to be created direct from Word, PowerPoint and Excel. HP provides its own free download, Printing Pro. Canon provides their own PosterArtist Lite and HP provides Serif PosterDesigner Pro, though that is for an additional cost.

Features - who holds the advantage?

One of the non-printing features that we were seriously impressed with, and a system available on both models, is the Accounting Manager. This provides you with the specific cost of each job which is clearly displayed. All you have to do is put in the unit costs for media and ink and in return you can be provided with totally accurate information covering media used, ink type, area printed and total time of task. For those of you who are then wondering what you can do with that information, it can be stored on a CSV. file and then opened using Excel.

Driver features is an area where these two models are perhaps more easily separated. Canon-only features include the ability to include a watermark on all prints, a Thicken Flat Lines image enhancement option, a poster printing capability (2x2) in addition to date, time, user-name and page number, and a unidirectional print selection to help avoid any banding across output. The Canon also has more simple colour adjustment options, including brightness, saturation, contrast and sliding scales for cyan, magenta, black and yellow. The HP only allows for brightness to be adjusted.

HP-only features include a useful thumbnail preview which allows you to check any colour adjustment effects on images, and a huge plus we found is the PANTONE Emulation which enabled us to print a swatchbook of multipole PANTONE colours which then allowed us to check just how accurately these colours could be reproduced on different media.

So, having read our review of the Canon imagePROGRAF PRO-6000S and the HP DesignJet Z6800, you may have decided which you prefer, or you may still be undecided. Perhaps the best way for you to establish which model would best suit your needs is to get in touch with us and then come and see them ‘in the flesh’. One thing’s for sure, we know you will be impressed with both models