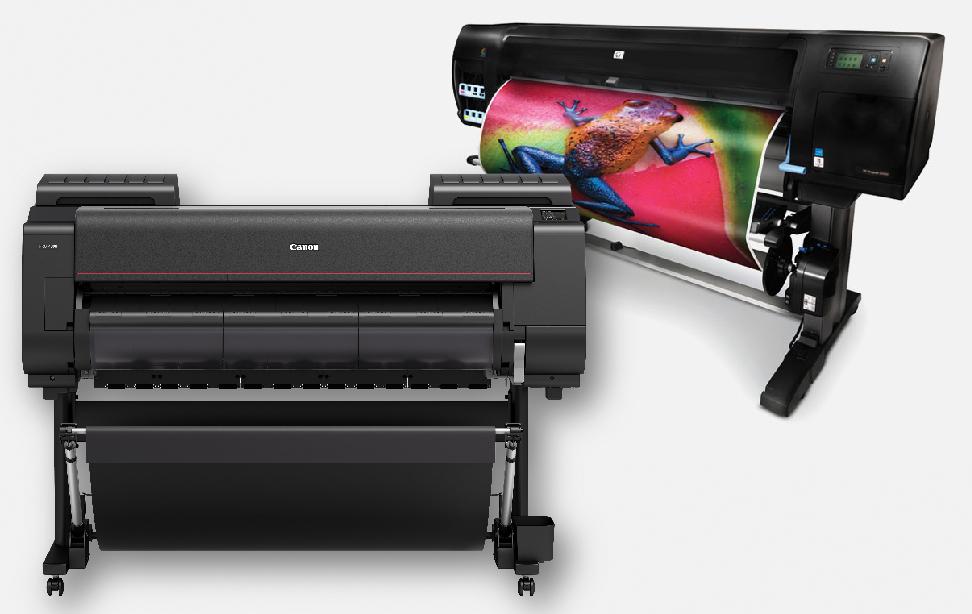 Deciding between the Canon imagePROGRAF PRO-4000S or the HP Z6200

Despite all the advancements in digital technology, there is still huge demand for printed media in today’s uber-competitive business and retail world. Fighting over fulfilling this demand are the Canon imagePROGRAF PRO-4000S (Canon) and the HP Z6200 (HP). Embracing all that is good about digital technology, the quality of prints from both these machines is exceptional and to all but the trained eye as good as any traditional offset print.

If there is a problem, it is deciding between the two as they are serious contenders for use in photographic studios in particular and the graphic arts market in general. For some of you the choice may come down to familiarity with a brand name – we acknowledge that though a diminishing quality, brand loyalty is still key for many – while for others, speed of printing may be more critical than the fine differences in image quality between the two machines. As retailers of both models, here at Entwistle Group we thought we would do some side-by-side testing to see if we could help you come to a more informed decision when it comes to choosing a printer of this professional quality and capability.

In summary, where image quality is concerned, we could clearly see that both the Canon Pro 4000S and HP Z6200 quality was extremely impressive with highly accurate colour reproduction creating natural skin tones along with fine detailing in light and dark contrast areas. What we did notice with the Canon is that it had larger colour gamut on photo media, while text and fine line reproduction was marginally more impressive.

For actual speed of printing, there is little to choose from the two models and the deciding factor for you might actually be the principal use of the printer. If the major part of your output is printing posters on coated media, then we found the Canon Pro-4000S significantly outperformed the HP. However the honours were reversed where photo printing and gloss media were concerned.

The HP Z6200 seriously outperformed the Canon for single high-resolution portraits. In ‘Fast’ and ‘Standard’ modes it was 30.9% and 48.1% slower, respectively, when in ready state. However, when we printed off a single medium-resolution retail poster on matte coated media, the Canon was faster than the HP, by a respective 5.2% and 20.8% in ‘Fast’ and ‘Standard’ modes. It should not surprise you that when we ran off five A1-size portrait test documents the HP was 13.9% faster in ‘Fast’ mode and 45% faster in ‘Standard mode’, however for five copies of an A1 medium-resolution retail poster, the Canon was 9.5% quicker in ‘Fast’ mode, and 30.3% quicker in ‘Standard Mode’.

Productivity - can the HP Z6200 deliver?

When you add productivity into the mix, the Canon then nudges ahead of the HP Z6200, for two principal reasons. First, the Canon has the option for installing a dual roll unit which we found enabled us to switch seamlessly between two differing sizes or types of media without having to reload the alternative media.

Second, the Pro-4000S productivity level is increased through having the facility to change ink cartridges while printing is taking place thanks to its sub-tank system, whereas with the HP the printing process has to be stopped. This is marginally offset by the Z6200’s larger cartridges at 775ml as opposed to the 700ml for the Canon, so work interruptions are at least limited.

On the subject of ink, where consumption is concerned, again there is little to choose between the two models and once again personal preference may well come down to which media and image type you produce more frequently. The Canon Pro-4000S pipped it in terms of lower weight of ink used for Packaging Proof and Studio Portrait, while there was little to choose between them where Retailer Poster printing was concerned.

What we particularly liked about the HP was the Professional PANTONE Emulation feature which allowed us to create and print a swatchbook of PANTONE colours which then enabled us to compare reproduction colours on varying media types. Additionally we liked HP’s inclusion of a spectrophotometer which is a godsend for fast single-step media printing. The Canon makes up for the lack of a spectrophotometer though through the capability of calibrating the printer to not just the manufacturer’s paper, but other brands.

Hardware - which packs the greater punch?

From a technical standpoint, we found the Canon Pro 4000S was a more feature-rich and more powerful device. The Canon comes equipped with a 320GB hard drive as opposed to 160GB for the HP, and also has the capability of printing with security watermarks, providing borderless prints, good colour adjustment choices, whilst also offering Wi-Fi connection. This last feature means any document scanned on a Canon MFP can be sent, wirelessly, to the Canon printer.

Overall, we found that both models produced very good business graphics and both produced a superb range of halftone fills in colour mode. We could see no discernible graininess or banding with either model, and both produced excellent neutral greyscale halftone coverage.

We may not have provided you with all the critical information necessary for making a fully informed decision, but we believe we have covered the most salient points. However, we would strongly recommend you get in touch with us here at the Entwistle Group, and then why not come down and let us explain ‘in situ’ the many advantages of the Canon imagePROGRAF PRO-400S or the HP Z6200, as well as pointing out any specific disadvantages we may consider relevant to the nature of your business.